Around the Mets, it isn’t often that our heroes get the recognition they deserve.

Often, in fact, it’s just the opposite: our heroes are mocked by the general public.  Because, well, we’re so bad that THAT GUY is your hero???

Pedro Beato was a Mets hero for 18 innings to start the 2011 season, all of them scoreless.  He was gone by the end of 2012.  Marlon Byrd played hero in 2013, until we sent him to the Pirates for Vic Black and Dilson Herrera.  In that deal, we also lost John Buck, who had been our hero in April, when he’d bashed ten home runs.

Yes, during those losing years, heroes were hard to come by.

I myself am, or will be, relatively fortunate, as far as Mets heroes go.  David Wright is and will be my baseball hero, and he’s likely to be honored in some form when his time with the Mets ends – although his counterpart and longtime co-hero Jose Reyes almost certainly will not.  But – and I pride myself on this – my Mets career is just a tad longer than the captain’s, and before Wright made it big just after I began attending games at Shea, I was focused on another player.

I attended my first game on April 18th, 2004.  It was a typical Mets-style game: Jae Seo pitched, the Pirates hit, and we lost, 8-1.  Todd Zeile played third base, with the future captain still climbing through the minors.  But I was focused on another player.  From my little-league provided seat in the upper deck, I trained my eyes on the infield and watched Mike Piazza.

I had heard all about Mike Piazza, although at that point, I remembered little.  All I knew was that Mike Piazza, based on what I had heard, was the greatest player in the history of the world.  It’s really not far from the truth.  Our seats were so high that without the PA announcer, I probably wouldn’t have recognized Piazza from anyone else, but I knew which one he was, I knew to cheer when he came to bat, and I knew that with Piazza at the plate, we had a chance to do well.

Piazza probably didn’t do much that day: by 2004, he was a shadow of what he’d once been.  But the stories I’d heard of monstrous past exploits would not be overshadowed.  Mike Piazza was great.  That much was certain.

I’d get a chance to defend my cause later that season – or maybe even the season before; my memory is hazy on the chronology.  There was one other Mets fan in my first grade class.  I showed up to school one day armed with a bullet-proof piece of information that my dad had given me on the walk from home.

In the immediate aftermath, I was probably confused.  Years later, I’m more amused – and interestedly perplexed.  On multiple occasions, I’ve tried to pin down the date of that exchange, some time in late 2003 or early 2004 (almost certainly the latter), but it’s impossible to determine perfectly.  Still, it’s a story worth telling: it was my first argument as a Mets fan, and Mike Piazza was a central piece.

The fact that Piazza was no longer a baseball immortal sank in the following year, in memorable – to me, at least – fashion.  I was in the park, and turned on the radio just in time to hear the last pitch of a Mets inning.  The pitch was to Piazza, and it was strike three.  As WFAN went to commercial, Howie Rose informed me that the opposing pitcher had just come back from a 3-0 count to strike Mike out.

I was stunned.  This wasn’t supposed to happen to superstars like Mike Piazza.

I moved on quickly, but there’s a reason I remember that moment so vividly today: it was as I heard Piazza being retired that I began to understand the fickle, uncertain nature of baseball.  Piazza could strike out when a walk looked certain, just as Al Leiter – who, like Piazza, I’d only come to know as the ace of the staff after he’d lost the skills necessary to command the position – could have a bad start in the first night game I ever attended.  But once again, I was sure that one strike out didn’t mar Piazza’s Mets credentials in the slightest.  He’d already done enough.

Then Piazza left, and as the Mets suddenly became the most exciting team in town, I didn’t think about our departed catcher much.  But just because he wasn’t there didn’t mean my impressions couldn’t change.  I looked at the statistics.  I read the stories from ’99 and 2000.  And ultimately, I concluded, Mike Piazza had been every bit the superstar I’d imagined and then some.  Eight years later, I listened – on the very same radio as I’d heard that memorable strikeout in 2005, and, to boot, in the very same park – as Howie Rose inducted Piazza into the Mets Hall of Fame, thus confirming his superstardom and iconic status to New York, if not to the entire baseball world.  That would come later – yesterday, in fact.  But the confirmation, at that point, was not necessary.  Mike Piazza was a Hall of Famer, whatever those words meant.  That much was obvious.

I saw Piazza once – besides at Shea Stadium, I mean.  He was having a book signing on Long Island, and I knew I had to go.  I convinced my dad to drive me the night before, then got home from school, dashed through my homework, and left.  The store was absolutely packed when we arrived – packed to the point, of course, that there were no more wristbands left, and the wristbands measured how many books Mike would sign.  So, we wouldn’t get Piazza’s autograph.  But then, as we browsed the back of the Barnes and Noble aimlessly, we got something better.

A small crowd was gathered, not part of the signing line but around a side door.  I joined the crowd.  And all of a sudden, like it was nothing, the door opened, and Mike Piazza walked through it.

Most of the store didn’t notice.  They were already in line, craning their necks to look ahead to where they thought Piazza must already be sitting.  But he wasn’t.  He moved through the crowd that had gathered, shaking hands.  He shook my hand, and I stuttered something inarticulate.  Then, as the gathered masses began to notice him, he made his way up the escalator – the line, it transpired, was two whole stories long – and got down to book-signing.

That’s right: I shook hands with Mike Piazza.  I shook hands with, starting yesterday, a Hall of Famer.  As soon as he’d moved past me, I whipped out my phone and got a picture as quickly as I could.  You can barely tell who it is: little more than a figure getting off an escalator.  But I know who it is. 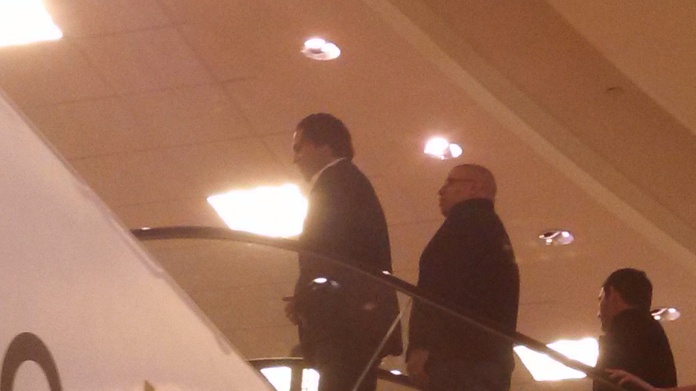 And after years of anger, speculation, frantic vote-counting and voracious disagreement with a Pedro Gomez-led stubbornly stupid BBWAA voting bloc, the designation is official.  Mike Piazza, greatest offensive catcher of all time (and, it turns out, an undervalued player on defense), is a Major League Baseball Hall of Famer.

Nitpicking remains, namely the logo on the hat on Piazza’s Cooperstown plaque, but as far as I’m concerned, it’s not important.  Piazza was our franchise player, our guy, the face of New York.  Piazza provided great moments in Mets history, and, on September 21st, 2001, in United States history.  In two different versions of Terry Cashman’s “Talking (Mets) Baseball,” Piazza has lines dedicated to him.  If that, along with the consecutive playoff appearances, the iconic moments, and the six minute long ovation as his Mets tenure ended, doesn’t make him a Met, I don’t know much else that could.

So that’s that.  After all these years, we’ve got a counterpart to Tom Seaver to visit in Cooperstown.  We’ve got, potentially, a second player to join The Franchise on the left field wall.  We’ve got another name in the conversation when Hall of Famers come up, and the Mets are brushed aside, almost spitefully, with, “well yeah, but who do you have besides Seaver?”  And most importantly, the transcendent greatness, superstardom, and offensive badassery of our guy, our friendly neighborhood catcher, has been recognized, and broadcast for the world to see.

And you may say that the Hall doesn’t matter.  But so long as Mike’s happy about it, I’m glad he finally got in.

One thought on “Early Childhood Development”