Someone should have told the Mets, entering a Friday night matchup against the surging Marlins, that they were supposed to be a slumping team.  Because from what we saw on the field, it sure didn’t look like it.

Sure, there were a few moments that didn’t go perfectly — Christian Yelich’s two cheap ground ball hits, for example, or the fifth inning as a whole, in which a sawed-off pop up, a grounder, and a fly out led to the then-tying run.

But on the whole, we looked pretty damn good: we held the Marlins to two runs that should have been one, and on the offensive side, we attacked like the pundits always wanted.

With the news that David Wright would hit the disabled list — and that’s a story that I’ll sum up another time — it seems that Wilmer Flores will be our starting third baseman for the foreseeable future.  Wilmer’s been terrible all year; now, in his first game in a starting role, he had two hits, a walk, and an RBI.

We keep saying that we’re due for some luck: this is what it looks like.

Likewise, someone should have told Don Mattingly that inserting a reliever with a 6.50 minor league E.R.A. wasn’t the best idea in the world.  We were a team coming off two lost series, looking for a spark anywhere we could find one — did Mattingly think that we’d led the opportunity to hit off a reliever who can’t even get AAA hitters out go?

Of course not.  And we didn’t.  Rene Rivera — of all people — sent a shot high above the left field wall — “Stanton territory,” said Gary Cohen — and we had the insurance we needed; Familia was out, and Henderson was in.  And three easy outs later, we were winners of game one.

Tied 2-2 in the seventh, things didn’t great, although they didn’t look terrible either.  Then Wilmer walked.  James Loney came to the plate. 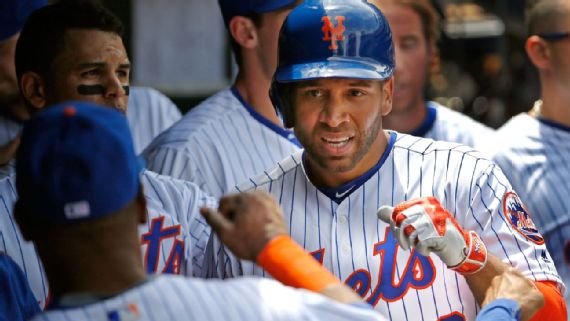 In game two of the White Sox series, I began pondering aloud the mystery of James Loney, why a career .285 hitter who hit .280 last year hadn’t gotten a shot in the major leagues.  Later in the game, Loney hit a ball to deep right.  It died at the warning track.

Well, not anymore.  The career .285 hitter with that little bit of pop showed it off, first pitch against a lefty reliever, and made us forget about Streaky Lucas Duda (sounds kind of like a Donald Trump nickname, I know).

It was his 100th career home run.  And for those of us who got the reference, Gary noted, he ran the bases forwards.

As for Thor, no one seemed to need to tell him anything.  Coming off his strange week of ejections and relief appearances, he came out throwing hard (as if I needed to tell you).

“He wasn’t at his best,” Gary noted, and I’d say that I was scared to see him at his best, except I already have seen him at his best, and it’s everything you expect and more.  Thor struck out nine — the ninth the most important, with the tying runs in scoring position and a 3-2 count to Derek Dietrich — over seven innings, and allowed two runs, that, if we’re honest, should have been one.

And no recap of tonight’s game would be complete without a mention of Addison Reed, who continued to amaze — there’s no other way to say it.  Three strikeouts, all on called third strikes.  two on fastballs, which makes you think that wow, he must really have those hitters fooled.  Not even a trace of solid contact.

And thus, the Mets went into Miami, and fairly easily, took game one of a ten game road trip.  A hardly notable win.  But one that, with its relative simplicity, sent the message that flawed as we may be, we’re still the defending league champions, and we’re still a damn tough opponent.