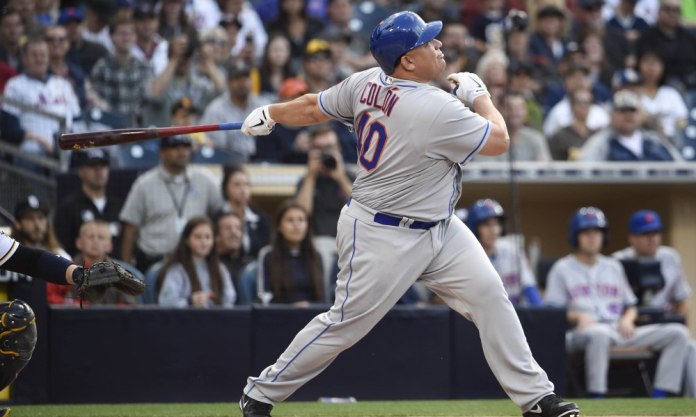 The world is not perfect.  There are still problems to be fixed.  From world hunger to our bench not hitting enough, not everything was good.

Bartolo Colón hit a home run.  Nothing else matters.

When the ball left his bat, my heart seemed to slow.  Or quicken.  It was far from normal, is all I know for certain.

You could hear it in Gary Cohen’s voice.  Gary has called record-breakers, walkoffs, and no hitters.  This was the most excited he’s ever been.

You could hear it in Ron Darling’s involuntary outburst as Colón rounded the bases, rivaling Keith’s last year, when Cespedes homered off Drew Storen, effectively handing the division to the Mets.

What more is there to say?

Bartolo Colón will be 43 in 17 days.  He’s had more than 200 career plate appearances, and prior to tonight, had never hit a home run.

We love him.  He plays the game for the right reasons, the right way.  He’s out there because he loves playing baseball, and he gives us everything he has every time he takes the mound because it’s the right way to play.

“Bartolo the kid,” I once called him, and tonight, it was clearer than ever.  He simply loves the game.  He’ll play until he can’t anymore.  None of us want to get old, not even 43-year-olds who no longer even remotely resemble athletes.  Bartolo doesn’t want to have to leave either.  Eventually, he will.  But not right now.  Not tonight.

This is what baseball’s all about, even more than the postseason and potential World Series.  It’s about the stories, the incredible moments, the players who defy obstacles and continue doing things that ordinary people can only dream of, conveying the message all the while that anything is possible if you just work at it.

Baseball is the greatest game in the world.  If tonight didn’t convince you, nothing will.

The National League must never adopt the Designated Hitter.  If tonight didn’t convince you, nothing will.

I’ll never give up on the Mets, because even at the lowest of moments, not that this was one, something like tonight can happen.  And after tonight, or anything like it, there’s always reason to keep going, to soldier on, to keep giving it your all.  Because as we learned tonight, life is freaking great.

To have spent time alive, on this planet, at the same time that Bartolo Colón was hitting a home run, is nothing short of a gift.  It’s an event that is so joy-inspiring, so momentous, that it’s hard to understand, even now.  Watching Colón drive the ball and then round the bases made me happier than anything I can remember in quite a long time, but even now, it’s hard to understand why.

We’ve been waiting for it for all the time that he’s been here, and that’s certainly got something to do with it, but why have we been waiting?

Maybe for just the reasons I outlined.  Maybe because this is precisely why we root for this team in the first place.  Maybe because watching a Bartolo Colón home run, telling our grandchildren about it in 60 years, and knowing that for one brief, shining moment, anything was possible, is why we made that long, bitter choice to be Mets fans.

We just watched Bartolo Colón hit a home run.  Frankly, that’s all I think I need to say.