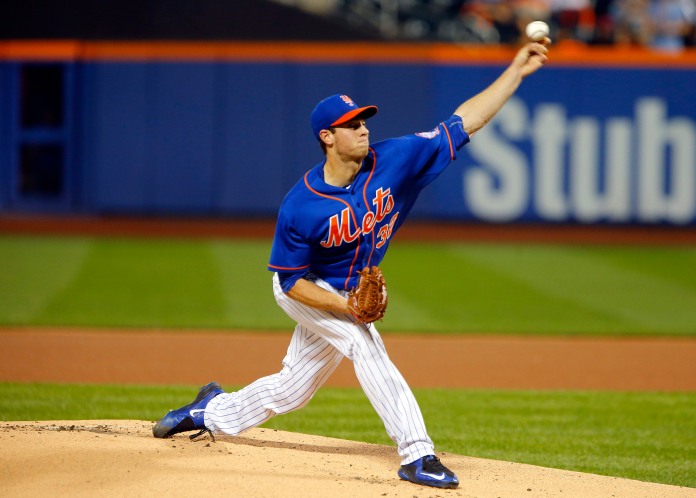 As most Mets fans were getting their first tastes of Jay Bruce, not to mention the returning tastes of Jose Reyes and Jon Niese, I was away, working as a camp counselor up in Maine.  So today’s game, in addition to whatever else it may have been, served as my re-introduction to the world of constant immersion in Mets baseball.

My first day of freedom in eight weeks went as follows: I went to the barbershop and had eight weeks of growth chopped off, I walked down to the bookstore and picked up some reading material, I picked up my first New York bagel since June, and I sat down to watch the Mets.

As a born and bred New Yorker, re-reading that list of activities, I can almost hear Bryan Adams’ “Heaven” playing over a montage of my day.  But I digress.

Evidently, the Mets have soured in my absence — how else can you explain the anger that permeates Twitter, not to mention our .500 record?  Why else would Steven Matz, he of the 7-1 record and the 2.30 or so E.R.A., suddenly be 8-8?  Why else would we be missing Cespedes, Lagares, Cabrera, Conforto, Granderson, Harvey…and even worse, why would we suddenly have Jon Niese back?

Not that I hadn’t followed all of this news meticulously during my absence, of course.  But I wasn’t exactly eager to observe these depleted, third-place Mets in person.

Then again: mediocre Mets, although not as good as good Mets, are better than bad Mets, which are in turn better than most anything else.  This is my 13th season as a hardcore Mets fan.  In seven of the previous twelve, we’ve been worse than 58-58 after 116 games.  So 2016 isn’t exactly an improvement, but it’s far from the worst I’ve seen.

And either way, it’s the Mets.  It’s great either way.

We had Matz on the mound, down from the mountain of his 7-1 start but up from the six straight losses that had turned his season from great to average.  We had a diverse bunch on the field: De Aza, Rivera, Ty Kelly, T.J. Rivera, Wilmer, Walker, Reyes, Bruce.

It’s one of those timelessly mediocre Mets lineups, that could easily change a few letters and come from 2004 or 1995 or 1981 or 1963.  And I couldn’t have asked for a better first game back.

Wilmer got us started — Wilmer, who’s already a Mets icon in his own right, who’s already been through an up and down, emotional career more befitting of a Hollywood starlet than a young shortstop.  Wilmer slammed a ball into the left field seats.

Wilmer Flores, in my opinion, is a bad player on both offense and defense.  But watching the Mets on TV for the first time in two months, I just can’t get myself angry about it.

Then, it was Walker.  Walker, constantly belittled as not worthy of being traded for Jon Niese (seriously, some people actually believe this), referred to as “declining” and “sub-average.”  Walker, driving a ball over the center field fence for his 21st home run of the year.

Then, in the eighth, it was Jose Reyes.  Not the Reyes of 2006, who stole bases left and right and could poke a ball through the hole quicker than you could blink, but a reasonable imitation of that same player.  Lining a single, stealing second, taking third on the throw, scoring on a wild pitch.  Exciting, National League Baseball.

Again: Reyes has not been great.  I’ll worry about that at a different, far less happier time.  For now, we’re doing fine.

And then, for good measure, it was T.J. Rivera, apple of bloggers’ eyes. constantly targeted for a call-up, finally getting it done, driving in the first two runs of his career.  T.J. Rivera, World Series winner?  Who knows?  Fun to watch?  Why not?

Meanwhile, as if he’d been saving his best pitching for when I’d be able to see it — which I suppose I would thank him for, if it hadn’t cost us a win or two — Steven Matz was making one of his trademark starts.  He didn’t look so good, I thought at the beginning.  Maybe not quite as sharp as he could be.

And then, around the sixth inning, I stopped worrying about his sharpness and realized that he was throwing a no-hitter.

Yes, Alexei Ramirez broke it up.  No, Matz didn’t throw a no-hitter, or even a complete game.  But boy, he sure looked good out there.  World Series good.

Matz left, and Addison Reed came on, at which point I was finally able to relax, and took a ten minute nap.  Well, not really.  But knowing Addison Reed, I could have, and would not have missed much.

Exit Reed, enter Ynoa…and soon enough, put it in the books.  We needn’t get lost in the lone ninth inning run, Gabriel Ynoa getting hit around…whatever.  A five run lead in the ninth inning, the stress-free completion of a win, a jubilant post-game press conference from Terry Collins, which, if you’ve been following his postgame press conferences, isn’t exactly the norm lately.

After two months away from the Mets, what more could you ask for?