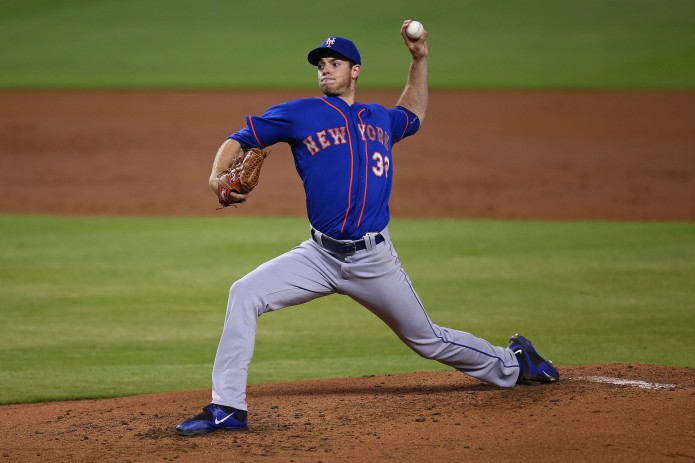 Steven Matz continues reminding us that having four aces in five spots is nothing if not abjectly wonderful.

Who knew that Chase Utley’s dirty slide into Ruben Tejada would prove useful in both the short and long runs?

It certainly was in the short run: despite costing us our most proficient defensive shortstop, its negativity swung the series in our favor.  After everyone was through talking about Chase Utley, they realized that we’d already won the series in five, and were well on our way to sweeping the Cubs as well.

And in the long run?  Chase Utley was so scared of retribution, last night, that he was removed from the lineup.  He’d been the Dodgers leadoff man, one of the only parts working well on a team that’s barely clinging to .500.  And now he was on the bench.

He didn’t hit until late in the game, when he entered to make a pinch-hitting appearance.  And he made a harmless out.

Maybe it’s just me; maybe it’s irrational.  But I’ve got a feeling that after today, Chase Utley’s brief days as leadoff hitter and reinvigorated offensive player extraordinaire are over.  Playing the former team of the shortstop whose leg you broke will do that to you.

And again, while everyone was focused on Chase Utley, the Mets were going ahead and winning.

The pitching matchup, in its own way, was an intriguing one: lefty phenom versus former lefty phenom, upswing versus tail end, future versus past, you name it.  Steven Matz on one side, the unfortunately traded Scott Kazmir on the other.  And as if seeking revenge for everything, Curtis Granderson sent the first pitch of the night over the right field wall.

RBIs from Granderson, right there in the first, Plawecki in the second, and Matz himself in the sixth, to go with the daily RBI from Cespedes.  That’s how our offense works: everywhere, up and down, attacking from every angle until you don’t know whether to forfeit or just keep giving up runs left and right.  Sure, we only scored four.  With our pitching, that’s more than we needed.

The bullpen is bad. No.  NO.  GOOD.  The bullpen is GOOD.  Let’s get this through our heads, because we’ve all been denying its truth for far too long.  The bullpen is just GOOD.  Jim Henderson, Hansel Robles, Addison Reed, and Antonio Bastardo are all good, and then there’s Familia, who even bullpen skeptics have admitted is good.  It’s a damn good bullpen.  Against the Dodgers, they proved it, or at least, they continued proving it as well as they possibly could: three scoreless innings, only one walk and no hits.

And this is what’s so great about this team: now we’ve got deGrom, and then we’ve got Thor, and whoever the Dodgers throw out there simply will not measure up.  Series win?  Let’s go get it.  Series sweep?  Same response.

And my favorite part?  Chase Utley was barely mentioned, because his contributions to the Dodgers are now so insignificant that his play doesn’t bear even a token mention.  Ah well, that’s what happens, and he deserves significantly less than he’s got left, but I’ll take what I can get.

We’re going to go out there tonight and win the series, and go out there tomorrow and sweep it.  And the Dodgers won’t go down easy; they’ll put up a fight.  But so long as they’ve got Chase Utley on their side, we’ve got fair fortune on ours.